Pelican crisis: "It will take some detective work" 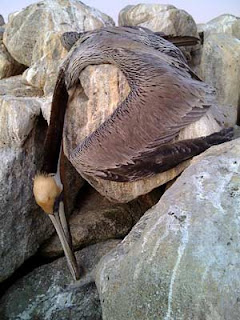 In 35 years of studying pelicans, Dan Anderson, an avian specialist at UC Davis, says “it will take some detective work” to find out why scores of pelicans are showing thin, disoriented or even dead (photo, right) from Oregon to Baja California.

In a story from the Chicago Sun-Times, Anderson, says he’s only seen this kind if event “once or twice” in his professional life.

Others are feeling the same way: “We’ve seen enough to imply that something is odd, and right now it is a big question mark what it is,” said Jay Holcomb, Executive Director of IBRRC said in the same media report.

So far, many theories have surfaced about what might be happening. It could be a toxin, such as fire retardant, running off the land from recent fires. Or the domoic acid, a nuero-toxin that causes brain damage. Or even the cold weather that hit the Pacific Northwest in December that triggered another disease. Maybe all three contributed to this confluence of events.

Note: Recent tests of six pelicans did show levels of domoic acid in three of the birds. Read the press release 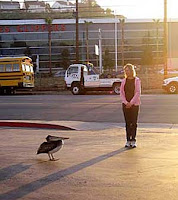 Since mid-December, IBRRC has taken in 160 pelicans for treatment in two California bird centers. IBRRC has also reported at least 300 dead brown pelicans in this same time period.

They been found in the oddest places: freeways, backyards and in store parking lots. We even had one report of one found at 7200 feet in New Mexico. They are disoriented, malnourished and badly in need of care. [ Note: Photo, right, from Albertson’s parking lot in Southern California – Photo courtesy: Peter Wallerstein/Marine Animal Rescue ]

In meantime, if you see a pelican in need, please call this toll free number: 866-WILD-911. You can submit unusual photos of pelican sighting to webcoot@ibrrc.org)

How to help the pelicans:

Shop at Ralphs Grocery Store? Sign-up your card to help