This week the release of cleaned birds back to the wild hit the 400 number mark. On Tuesday morning December 18, a team from the Oiled Wildlife Care Network released 4 birds – 2 horned grebes and 2 surf scoters – at San Pablo Bay. All the birds came in from the Cosco Busan oil spill that struck San Francisco Bay on November 7.

Rehabilitation continues for those birds in care with secondary problems, including
hock, keel and foot lesions. Releases will continue as birds come off of
medical care. 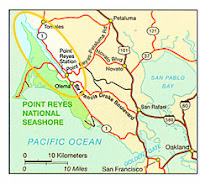 Another 35 birds were released back into the wild Monday at Heart’s Desire Beach at Tomales Bay. All the birds were washed of oil at the IBRRC/OWCN bird rescue center.

The bird release was moved north because tar balls have been discovered in the water around Half Moon Bay – near the first release site. Last Friday, 38 washed birds were released at Pillar Point Harbor about 25 miles south of San Francisco.

Tar balls are fragments or lumps of oil weathered to a semi-solid or solid consistency. These are most likely remnants from the SF Bay oil that occurred on November 7, 2007.

First birds released back into the wild 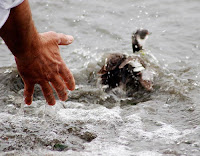 38 birds were released into the Pillar Point Harbor just north of Half Moon Bay. The harbor is 25 miles south of San Francisco.

About of dozen volunteers brought the colorful boxes down to the shoreline. One by one the birds were gently carried into the the calm harbor waters. As on most of these releases, the media nearly outnumbered the birds, staff and volunteers.

Released birds included 25 Eared and Horned Grebes, seven Western and Clark’s Grebes, five Scaups and one Common Murre. The majority of the birds oiled in this spill appear to be Grebes, Scoters and Scaups.

As of Friday evening, November 16, nearly 500 birds have been cleaned of oil at the IBRRC/OWCN facility located in the San Francisco Bay Oiled Wildlife Care and Education Center at 4369 Cordelia Road in Cordelia, CA.

A total of 970 birds are in care; 1,113 have been found dead in the field by wildlife rescue teams. Search teams ares still working to recover live and dead animals oiled in the spill. 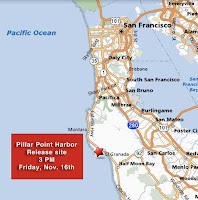 The spill was caused by the Cosco Busan container ship striking the SF Bay Bridge on Nov 7, 2007. A gash on the side of the ship caused 58,000 gallons of bunker fuel oil to leak out of the 810-foot-long vessel. The U.S. Coast Guard admitted it was slow to report the severity of the spill.