Vinnie’s Odyssey: The journey of an oiled cormorant 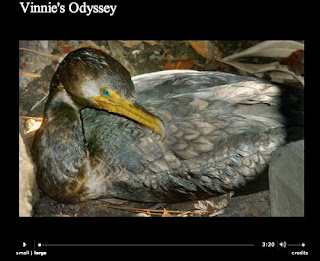 Two months after the Cosco Busan oil spill, the bird center has been deactivated from treating oiled birds, but memories AND media stories are still surfacing. I meant to post this one about Vinnie, the adorable double-crested cormorant rescued and stabilized in Marin and washed of bunker oil in Cordelia.

This nice piece by writer Jim Staats and photographer Jeff Vensel appeared in the Marin Indepedent Journal just before Christmas. They followed an oiled bird from rescue to rehabilitation. The slide show of photos and audio capture the hard work by everyone involved.