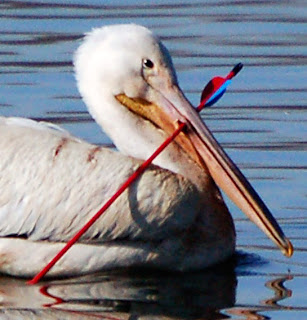 The reward was raised today to $6,000 for information on the culprits that shot this American White Pelican with an arrow earlier this month in the San Fernando Valley area of Los Angeles.

Others stepped forward to add another $3,500 to the reward started by the The Humane Society of the United States (HSUS. The reward is for information leading to the identification, arrest and conviction of the person (s) responsible for shooting this American White Pelican near Lake Balboa in the Van Nuys/Sepulveda Dam area.

There has been reports that the arrow might be a hobby or kid’s arrow and not from a professional archery set. 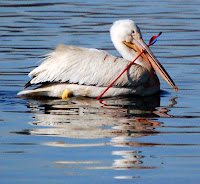 Under the ‘we couldn’t have said it much better’ column:

“Few things highlight the capacity for pointless cruelty by humans more than the injured pelican at Encino’s Lake Balboa. Someone shot the poor thing in the beak with an arrow, and now it can’t even eat.

Why someone would torture an elegant creature that beautifies the park is simply unfathomable. But with the bad comes the good. This creature’s suffering has also highlighted the awesome capacity for compassion by humans: Many people are trying to help the pelican survive. The caring people include officials at the International Bird Rescue Research Center in San Pedro, who have been attempting to track down the ailing bird.

We can only hope that they reach the bird before it succumbs to its injuries – and that the perpetrator is caught before going on to other senseless brutality toward any of God’s creatures.”

– From the Daily Breeze newspaper January 20, 2008 editorial on the blight of an American White Pelican shot in the bill by an arrow. More info on the IBRRC website

Searching for pelican with arrow shot in bill 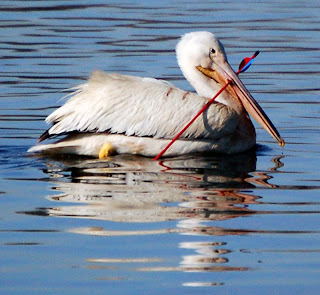 Wildlife capture specialists from International Bird Rescue Research Center in San Pedro are joining forces in attempts to rescue a juvenile American White Pelican near Lake Balboa, shot in the bill by an arrow. The archery arrow pierced the upper and lower portions of the bill, sealing the bird’s mouth shut. It has been this way for over one week. A $2,500 reward is being offered to catch the culprits.

The pelican has been spotted several times over the past week in the San Fernando Valley area of Los Angeles, especially at Lake Balboa in Woodley Park in Van Nuys.

The Humane Society Of The United States is also offering a $2,500 reward for information leading to the arrest and conviction of the person(s) who shot this federally protected bird.