From clockwise, an oiled Grebe on the beach off San Francisco Bay, one of the ships involved in the collision in the fog, and IBRRC founder, Alice Berkner.

Today marks the 40th anniversary of the Oregon Standard Oil Spill, the massive 800,000 gallon spill that occurred in San Francisco Bay in 1971. The concept of International Bird Rescue Research Center (IBRRC) was born in the midst of the spill because it was clear way back in 1971 that oil spills were becoming a part of our reality, and after a quick review it was evident that no organization had developed effective techniques to care for oiled birds. IBRRC was created to do just that – develop techniques and protocols to humanely treat and rehabilitate oiled birds. 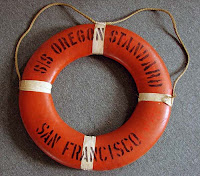 IBRRC’s Founder Alice Berkner, and a handful of others, came up with the concept of IBRRC while trying to help the more than 7,000 birds that filled warehouses around the Bay Area. Most of those birds died, but their deaths were not in vain. The demise of these birds only encouraged people to try harder, and by April of 1971 IBRRC was incorporated as a non-profit organization.

Since then, tens of thousands of animals have been recovered and given a second chance thanks to IBRRC and because of one person’s vision and focus. On behalf of all of us who have followed in your path, thank you Alice for your passion and vision, and for creating IBRRC.