850+ Penguins stranded and hungry in Brazil 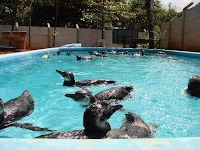 You may have seen the recent articles about the juvenile Magellanic Penguins showing up on Brazilian beaches malnourished and dying. IBRRC is working with the International Fund for Animal Welfare (IFAW)to manage IFAW’s Penguin Network to ensure excellent care of oiled and sick penguins in South America.

To date, there have been more than 850 penguins collected, almost all juveniles. The birds are coming into care in extremely poor body condition and many have died.

There are two groups in this part of Brazil that normally work with marine mammals who have started taking these stranded penguins into care with the hope of rehabilitation and release.

•In Salvador – Bahia, NE Brazil, Instituto Mamíferos Aquáticos (IMA) has received 500+ live juvenile penguins so far. Only 2 were adults. As of 6 August 06 ≈ 300 are alive.

•In Vitória – Espírito Santo, Southeastern Brazil, Instituto Orca has received some 250+ penguins and it is believed that there are around 90 still alive.

According to penguin researcher, Dr. Dee Boersma, there is a flow of warmer water (1C higher than normal) which has caused the juvenile penguins to keep going north, past their usual range, where they are unable to find adequate food. There is always a high mortality rate for first year birds but this increased northernly range and lack of available food had increased the normal mortality rate for this group of penguins. Almost all of the penguins being found on beaches in the north of Brazil have been juveniles and since they are starving, they come into care in an extremely debilitated state.

The local groups working with penguins have utilized area pools to swim the penguins and monitor blood values of the birds. They also are using penguin feeding protocols developed by the IFAW/IBRRC team.