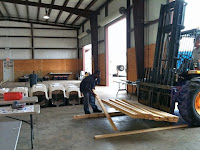 On the third day of our response, International Bird Rescue continues to work with Tri-State Bird Rescue, the lead oiled wildlife organization, to set up and staff rehabilitation centers in Louisiana, Alabama and Florida, where the growing Gulf of Mexico oil slick is expected to impact birds.

Today the high winds and thunderstorms prevented attempts for clean-up or oiled bird capture. In the meantime, the IBRRC team is continuing to work with Tri-State Bird Rescue, the lead wildlife organization on the ground, to prepare the centers in Louisiana, Alabama and Florida.

We continue to care for the one bird recovered so far: a Northern Gannet. It was washed yesterday and is in stable condition.

We have also now activated more of our response team to augment the centers and support search and collection efforts. They will be arriving on Monday, May 3rd.

We know that there has been an outpouring of concern from people all over the country wishing to help. IBRRC is not in the position to coordinate volunteers or other trained people. We can only reiterate that the best thing you can to do for now is to call the volunteer hotline that has been set-up by BP: 1-866-448-5816. 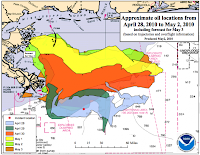 The latest NOAA oil slick map shows the Deepwater Horizon spill enveloping the Gulf of Mexico – including shoreline areas of Louisiana and Mississippi. It’s moving eastward and is expected to hit Florida shores by midweek.

In Alabama Gov. Robert Riley is calling in the National Guard to help with barriers against the sea of oil. Riley is quoted as saying that 80% of the thousands of feet of boom laid down off the gulf coast had broken down because of rough seas and bad weather.

The new year is turning out to be a busy one for IBRRC. In the first half of January, the bird center has personnel dedicated to the following events:

•Patagonia oil spill in Argentina
IBRRC is again teaming up with international wildlife professionals on Patagonia’s coast to help save 400 birds oiled affected by a mystery spill. Read more

•Battered by storms, birds flood center
Over a 100 birds, including a long-lost tropical Frigate bird, arrived for care at IBRRC’s Northern California center. All the birds in care were affected by severe weather that hit the Bay Area during early January. Winds in some areas were clocked at over 100 miles an hour. See full story 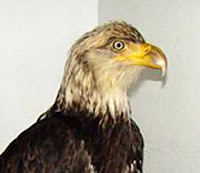 •Oily Bald Eagles arrive at IBRRC’s Alaska center
At least 35 bald eagles, who got caught in a feeding frenzy at a Kodiak fish processing plant, are on the mend at IBRRC’s Anchorage bird center. The oiled birds were rescued and flown to the center after becoming unable to fly following the melee inside a fish waste truck. More info

If you can, please help us out with our year-round bird rehabilitation program. Learn how to donate.