Another wake up call: Global warming and birds 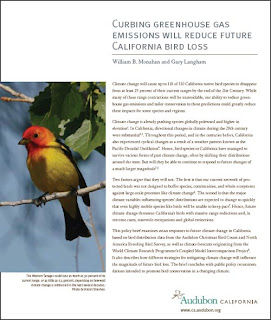 If you’ve been on the fence regarding global warming, here’s a sobering Audubon California report that should move you to some sort of action.

The study released Tuesday finds that California will lose significant numbers of its native birds as the continuing shifts in climate change quickly shrinks the range and habitat of more than 100 species. See Audubon website

According to the report:

Climate change is already pushing species globally poleward and higher in elevation. In California, directional changes in climate during the 20th century were substantial. Throughout this period, and in the centuries before, California also experienced cyclical changes as a result of a weather pattern known as the Pacific Decadal Oscillation4. Hence, bird species in California have managed to survive various forms of past climate change, often by shifting their distributions around the state. But will they be able to continue to respond to future changes of a much larger magnitude?

Two factors argue that they will not. The first is that our current network of protected lands was not designed to buffer species, communities, and whole ecosystems against large-scale processes like climate change. The second is that the major climate variables influencing species’ distributions are expected to change so quickly that even highly mobile species like birds will be unable to keep pace. Hence, future climate change threatens California’s birds with massive range reductions and, in extreme cases, statewide extirpations and global extinctions.

These dire predictions are based on models of future climates, and serve as a companion to a nation-wide Audubon Society study. Using data collected over the past 40 years, that study concluded that 177 bird species in the U.S. are spending the winter farther north because of a warming world.

In California, scientists worry that the quickly warming climate might not only force certain species to move northward, but wipe out others that are not quick to adapt.

At IBRRC our observation and treatment of sick Brown Pelicans these last two months seems to support our concerns. In fall 2008, Pelicans spent longer in the north where fish stocks seem to be more plentiful. When the weather changed quickly in Oregon and Washington, they got stuck in freezing temperatures and fled south. Some got off course and other died in route. Over 200 ended up being treated at our California bird centers. See: Update on California Brown Pelicans in distress

All is not lost. The study suggests that if we can significantly curb our output of greenhouse gas emissions (cars, factories) and invest in conservation (walk, bus, bike, invest in a lower wattage footprint) we can greatly reduce the damage.

Come on folks, this is not a drill. Our health, planet and bird’s lives depend on us to get off our butts! 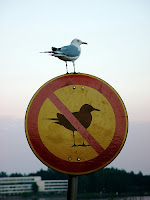 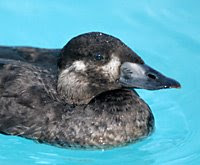 In our proud 37 year history of working with oiled, sick and injured birds, IBRRC has treated more than 100,000 birds. This includes oil spills and general rehabilitation treatment.

The list of birds, from Pelicans to Scoters to Terns, is grown each year and now includes over 400 different species. We just updated the species treated list on our website and you can view it here: