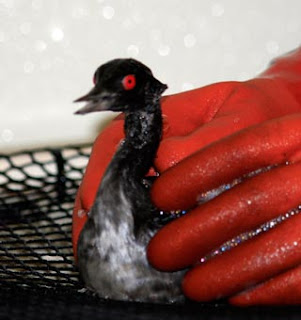 After collecting more than 40 oiled birds over the weekend, the search continues for soiled wildlife after a tanker spilled 400 to 800 gallons of bunker fuel into San Francisco Bay last Friday morning.

So far, 35 live birds had been collected and another 11 had been found dead, according to the California Department of Fish and Game.

Most of the attention has been turned on the Alameda area where the beach has been coated with tar balls from the spill from the Panama-based Dubai Star. 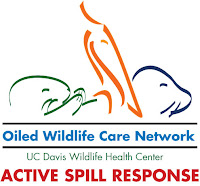 You can watch a video on OWCN’s blog:

We’re washing shore birds today (dowitchers and a plover). Thought folks might like to see a short video clip. The oil is very thick and starting to get more tarry so we use a pre-treating agent to loosen the oil and make it easier to clean off the feathers. You’ll see plenty of it coming off on the person’s gloves.

No volunteers are needed at this time.

Who and what is California’s Oiled Wildlife Care Network (OWCN)?

A new oil spill on San Francisco Bay this morning has put wildlife spill response teams on high alert. A two-mile-long slick of bunker fuel now stretches across part of San Francisco Bay after a refueling mishap at 6:48 AM Friday between a tanker and a barge.

The Panamanian tanker, Dubai Star, spilled 400 to 800 gallons of heavy bunker fuel about 2 1/2 miles south of the San Francisco-Oakland Bay Bridge. No birds have been rescued as yet and crews from OWCN/IBRRC have been mobilized to do search and collection of possible oiled birds and other wildlife. IBRRC is a long-time member of OWCN and helps manage two wildlife rescue centers in Northern and Southern California.

The last oil spill on San Francisco Bay in November 2007 resulted in thousands of bird deaths from the 50,000 gallon spill that spread throughout the bay with help of strong tides and winds. Beaches were closed in San Francisco and Marin Counties after the Cosco Busan container ship side-swipped the Bay Bridge in heavy fog.

The San Francisco Dept of Environment and Dept of Public Health have issued the following precautionary recommendations to the public:

– For Treasure Island Marina, slipholders are asked to keep their vessels in the marina over the weekend.

– Fishing around Treasure Island, Yerba Buena Island and from the east side of San Francisco Pier 39 to Candlestick Point is not advisable.

– Members of the public should not attempt to handle or clean-up any oil on their own.

– Should any volunteer opportunities to assist with clean-up arise, the public can contact the Department of Fish and Game Volunteer Hotline at 1-800-228-4544.

A new report on the San Francisco Oil Spill response officially released today, won’t surprise most folks. The Coast Guard is roundly criticized for it’s incredibly slow communication the first day of the spill when it took nearly 10 hours to let people know that copius amounts of oil spilled from the Cosco Busan container ship.

The report documents how government agencies failed to get the word out after the ship hit the Bay Bridge at 8:30 a.m. Nov. 7. First reports had the size of the spill at 140 gallons. It wasn’t until almost 5 p.m. that the Coast Guard figured out the spill was 58,000 gallons.

Also the report said the actual amount that spilled into the bay was 53,569 gallons. A total of 44 percent was recovered: 36 percent off the water and another 8 percent along the shoreline.

Many of the communication problems were hampered by language barriers. Coast Guard investigators had a hard time communicating with the Chinese-speaking crew. They had to resort to drawing pictures to find out what happened during the ship’s collision with the San Francisco Bay Bridge.

Another disturbing item in the report: some of the Coast Guard officers in charge of the spill response had little understanding of oil spill response and were unfamiliar with the geography of the Bay Area.

At least 2,500 birds died in the spill. Over 400 were cleaned of oil and released back into the wild. IBRRC working with the Oiled Wildlife Care Network (OWCN) helped rehabilitate the birds, mostly scaups, grebes and scoters.