Just in time for Earth Day: The 5 Gyres Project has news and videos of even more plastic trash circulating in the North Atlantic Ocean. The researchers found a soup of garbage in the Sargaso Sea – an area from Bermuda to the Azores Island – that contained stew of floating trash similar to the so-called Great Pacific Garbage Patch.

Moore is credited with discovering the Pacific garbage patch in 1997. He says the Atlantic Ocean contain as much or more plastic debris. Because the Atlantic is stormier, debris there most likely have been diffused, he said.

Algalita is one of the sponsors of this latest scientific efforts.

The industrial world generates large amounts of plastic debris that end up in the oceans: odd pieces of plastics thrown carelessly overboard, fishing lines and nets, container ship losses and all the junk carried by rivers and streams into the ocean. 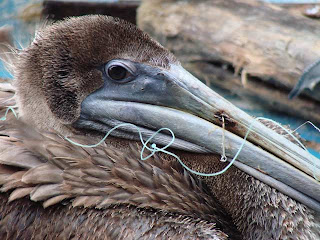 These debris are a hazard to shipping and especially to marine life. Here at IBRRC we receive many injured birds each year caught in fishing line.

What we all can do:

• Reduce your use of disposable plastic products
• Reuse and recycle what you can.
• Buy reuseable grocery bags to cut down on plastic bag use.
• Tell others about the dangers of marine debris.
• Pick up litter.
• Volunteer for beach and stream clean-ups.
• Remind others not release balloons into the atmosphere.

A another new study is under way to document the planet’s largest known floating garbage dump, called the Plastic Vortex or ocean gyre. It’s located about 1,000 miles northeast of Hawaii.

Using two boats, the Project Kaisei examined the largest area of plastic garbage situated approximately five days by boat from San Francisco. The tangle of plastic thought to be a sea of debris roughly twice the size of the state of Texas.

The expedition consisted of a large pass through the trash with the aim to collect and study plastic and other debris littering the ocean. The effort will be used to showcase new technologies that will be used for processing and recycling the plastic.

The “Plastic Vortex,” or what is sometimes referred to as the “garbage patch,” is within an area that is technically referred to as the the North Pacific Subtropical Convergence Zone. This area does not have rigid physical boundaries, and varies seasonally in both size and position.

Why is the Plastic Vortex a problem?

It is estimated that over 60% of the plastic and other wastes (including rubber and aluminum) in the ocean come from land-based sources, and once in the sea, they are at the mercy of the confluence of tides, currents and winds because they are buoyant. Over time through exposure to the sun and heat, some plastic materials can disintegrate into ever smaller pieces due to weather and UV impact.

The plastic debris leave their ugly mark on marine life. Birds injest the plastics and become entangled in other debris. The plastic residue is probably entering the human food chain.

According to press reports, Project Kaisei is a commercial endeavor, funded in part by international recycling companies that would like to find ways to captialize on the recycling this huge problem. More info

Do your part: Stash the trash

Oil spills are nasty, horrible messes, but do you know what may be worse? All the trash we dump into the oceans. From plastic lighters to toys to cigarette butts, the sea has become man’s monster garbage disposal. Walk along any beach after a major storm and the things that wash on our beaches will truly astound you.

Save the Bay kicked off a terrific public service campaign in 2006 to encourage all of us to pay attention to how we treat San Francisco Bay. It’s a good reminder for all of us.

Remember the candy wrapper you dropped on the street, or the bag that the wind blew out of your car? Chances are that those items are polluting the Bay and harming wildlife. Trash is accumulating in bays and oceans worldwide – one study found plastic outweighing plankton (the building block of the food web) by 6 to 1…

Tags:ocean, plastics, Save SF Bay, stash the trash
Posted in Uncategorized | No Comments » 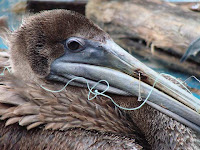 At IBRRC we’ve been witnessing first hand the mess that discarded fishing tackle causes on the lives of aquatic birds. Our recent response to brown pelicans in Santa Cruz and Monterey showed a high percentage of birds injured after being caught up in hooks and fishing line that are so much a part of the marine environment.

Since May 2006, the California Lost Fishing Gear Recovery Project has retrieved nearly 11 tons of gear from around the California Channel Islands (Santa Rosa, Santa Cruz, Anacapa and Santa Catalina). As well, the project has cleaned more than 1400 pounds of recreational fishing gear off public fishing piers from Santa Cruz to Imperial Beach including more than 1 million feet of fishing line. Several of these piers now have fishing line recycling bins, to encourage proper disposal of unwanted hooks and microfilament. See the full report

And don’t even get us started on the mess that discarded plastics – including toys and cigarette lighters – leaves on the ocean. Read: Birds suffer as world’s oceans become a big garbage can

All is not lost: 10 Things You Can Do To Save the Oceans