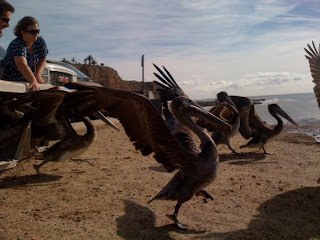 Back to the wild in San Pedro, CA with our release of rehabilitated Brown Pelicans.

These beautiful pelicans were taken care of at the Los Angeles Oiled Bird Care and Education Center (LABCEC) in Southern California.

Over the years, IBRRC has treated thousands of Pelicans at its two California bird centers. Thanks to contributions and foundation grants, our bird centers each have 100-foot pelican aviaries to help these majestic birds recuberate from injuries, sickness and stress.

How can you help? Adopt a Pelican!

Details about Pelicans in Peril

Another group of young pelicans were released back into the wild by IBRRC volunteers this weekend at Fort Baker near the Golden Gate Bridge. Most if not all of these brown pelicans had been rescued from collision of birds and anglers off the Santa Cruz County coastline in August. A lot of the pelicans came in with fishing tackle injuries before authorities closed the fishing piers in the Santa Cruz area.

Here are our five beautiful brown pelicans being released near Fort Baker. Quite a crowd had gathered in the parking lot on the higher level. All were quiet and respectful. There were many smiles.

John did the release. He wasn’t sure what to do when the first two pelis wouldn’t leave their carrier. He tried gently tilting the carrier. That didn’t work, of course. Then he tried to prop the carrier door open so he could go open the next two carriers. By that time, the first two had worked up their confidence and ventured out, followed by the others. The last to leave wasn’t sure…. He hung around for a little while, trying to make up his mind. We gave him as much time as he needed. And then he must have seen the others, and he took off. I was glad to see that all five were reunited in the water.

Thanks to Jean for the video report.