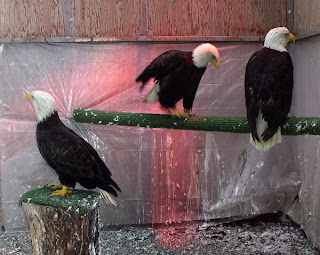 There’s good news for most of the 30 Bald Eagles saved in Kodiak, Alaska in January after they tangled with a truck full of oily fish guts. At least 26 birds were successfully released back into the wild in the Kodiak area after being cared for at the IBRRC/Bird TLC bird center in Anchorage. Only two area still in care. Here’s the latest tally:

(As of this week, only two of the 30 original birds are in care)

Back in mid January 50 eagles of the majestic birds were coasted in fish oil after landing in an uncovered fish guts truck at the Ocean Beauty Seafood company. 20 of the birds suffocated with the birds rushed the truck. See the full story on the IBRRC website