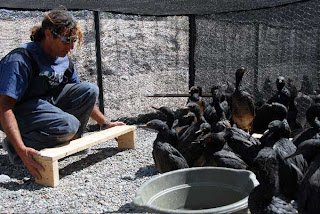 Fundación Patagonia Natural (FPN) staff member Carla Poleschi is the Wildlife Branch Director for the Argentine Government’s Incident Management Team. Carla has worked with IFAW on other spill responses in Argentina and has asked for the International Fund for Animal Welfare’s Emergency Response Team to help manage the wildlife response.

Spill clean-up is underway and being handled by the Navy but the Government has yet to determine the source spill. The oil spill has covered an area of 24 square kilometres in the Atlantic Ocean. Recent satellite imagery is being analyzed to try and determine the cause of the spill.

An oil spill of unknown origin was detected on December 26, 2007 along the coast of Chubut Province, in Argentina. The spill site is located 12 km north of Comodoro Rivadavia, in Caleta Cordova, approximately 1,740 km south of Buenos Aires.

The Argentine Government is supporting the development of a wildlife response facility, as well as providing supplies and equipment needed to care for animals. In addition to the the International Fund for Animal Welfare’s IFAW ER Team, there are approximately 100 volunteers under their direction, assisting with the rescue effort.

IBRRC is no stranger to working in South America. It helped in Argentina in 1991 and since then has helped develop and manage the IFAW/IBRRC Penguin Network. The network as ben instrumental in bringing many South American wildlife groups together to share resources, information and expertise. See: Penguin Network info

IBRRC works in partnership with IFAW worldwide to response to major spills and develop trainings to help local groups learn how to best treat oiled animals. IFAW is again sponsoring IBRRC staff and other wildlife professionals Mexico and elsewhere to travel to this remote region.