Birds shot at Oakland Airport now in care at IBRRC

Recent bird hazing efforts at Oakland International Airport have raised concerns about how the birds were shot and left to die and why authorities didn’t alert local wildlife agencies.

Late on December 23, International Bird Rescue Research Center (IBRRC) was asked to assist in capturing injured birds spotted just south of the Oakland airport. Early the next morning two of our response team members worked with California Department of Fish and Game and East Bay Regional Parks to pick up four dead birds and capture what turned out to be five injured shot birds. Three of these birds have since died while two Western Gulls that sustained gun shot wounds are in a guarded condition and still in care at IBRRC’s seabird rescue center in Fairfield.

It has now been reported that the birds were killed by contractors hired by the Oakland International Airport who contracts with the USDA to haze (frighten) birds away from the area if they are deemed a hazard to aircraft.

IBRRC supports any and all humane methods to haze birds away from airports. If these methods are not effective and government officials approve the killing of birds near an airport, it is our opinion that this must be done quickly, professionally and humanely. This also means that the bodies of dead birds should be picked up and any live injured birds should be humanely euthanized.

In the case of the Oyster Point incident local authorities were not informed that birds would be shot. At least 60 birds of various species, including brown pelicans, were shot and their bodies left floating in the area creating a concern that a poaching incident had occurred. Additionally a number of live injured birds with broken wings and other injuries were found by the public creating an unnecessary incident that created emotional stress to peoples lives and increased expenses to IBRRC, who is incurring the cost of the capture and the rehabilitation of the remaining two gulls. 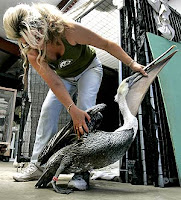 What is it that causes so much anger against Brown Pelicans?

This week 11 young pelicans were found with their wings intentionally broken along an Orange County beach in Southern California. Only one pelican has survived. There’s now a $5,000 reward for information leading to an arrest.

Pelicans have been a target of cruel and unusual acts. Each year IBRRC bird center wildlife clinics treat pelicans with slashed pouches and other injuries that appear to be intentional. In 2003, IBRRC received mutilated pelicans that showed up at Cabrillo Beach near San Pedro.

The California Brown Pelican is still protected by the Endangered Species Act. Anyone with information relating to these incidents is encouraged to contact Special Agent Ed Newcomer of U.S. Fish and Wildlife at (310) 328-1516.

If you can make a donation to help all pelicans that come into the rescue center, go to the Wetlands and Wildlife Care Center’s website. To add to the reward money, please call IBRRC at (310) 514-2573.