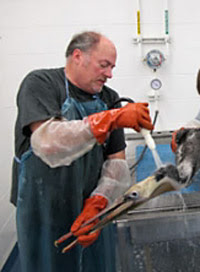 The Ocean Heroes contest was created in 2009 to recognize individuals making a difference for the ocean, with winners announced on World Oceans Day. This year, Oceana also named a group of Junior Ocean Heroes, honoring The Shark Finatics from Green Chimney High School in New York.

“We are proud to honor these everyday people who are making a difference for the ocean,” says Oceana’s CEO Andrew Sharpless. “In light of the disaster in the Gulf and the state of the oceans worldwide, we need people like the Holcomb and the Finatics to continue their work and inspire others to get involved.”

Holcomb is a lifelong California resident who has been passionate about the ocean since his childhood along the coast. He began his career at the Marin Humane Society and then helped found the rehabilitation program at the Marin Wildlife Center. He joined IBRRC in 1986 with 20 years of animal rehabilitation experience, and has responded to over 200 oil spills around the world, including the 1989 Exxon Valdez and the 1979 Gulf spills.

“It is particularly poignant that I have won this award in the midst of the greatest oil spill in U.S. history,” said Holcomb. “My career stems from a passion that has burned in me since I was a child. I have always approached my work as trying to change the world one bird at a time. My hope is that this award reminds people that whatever we can do personally to protect our ocean does make a difference, no matter how overwhelming the task may seem at times.”

Given his busy schedule on the ground in the Gulf, Holcomb has limited availability for interviews.

Oceana campaigns to protect and restore the world’s oceans. Its teams of marine scientists, economist, lawyers and advocates win specific and concrete policy changes to reduce pollution and to prevent the irreversible collapse of fish populations, marine mammals and other sea life. More at oceana.org

We’re pleased to announce that on World Oceans Day, Oceana is honoring those who have made a significant, ongoing contribution to ocean conservation.

This year, our very own Jay Holcomb, IBRRC’s executive director, has been nominated as an “ocean hero”. The group had hundreds of heroes nominated, and a panel of experts selected a handful of adult and junior finalists. Vote here

Also, for every pledge made, Oceana will receive a $1 donation.

Oceana, founded in 2001, is the largest international organization focused solely on ocean conservation. They have offices in North America, Central America, South America and Europe. The group campaigns to help return the world’s oceans to former levels of abundance. It uses a science, law and celebrities to help get its message across to the general public. Read more

Oceana Video 2009 from Oceana on Vimeo.