Video report on release of 373 penguins in Brazil

If you never witnessed the remarkable and heartwarming release of rehabilitated penguins, check out this video from CNN:

The Magellanic Penguins were flown on a Brazilian military C-130 Hercules transport plane. In all, 373 young penguins were rescued, rehabilitated and released last weekend after their search for food left them stranded, hundreds of miles from their usual feeding grounds.

Animal-welfare activists loaded the birds onto a Brazilian air force cargo plane and flew them 1,550 miles to the country’s southern coast, where a crowd of onlookers celebrated as the penguins marched back into the sea.

“We are overjoyed to see these penguins waddle back to the ocean and have a second chance at life,” said veterinarian Dr. Valeria Ruoppolo of the International Fund for Animal Welfare, the group that oversaw the rescue.

An IFAW ER Team, along with colleagues from Center for the Recovery of Marine Animals (CRAM), Institute for Aquatic Mammals (IMA) and the environmental authority in Brazil, IBAMA, released the penguins in early October, making history as the largest group of these penguins to ever be released in Brazil at one time. All of the birds were banded with Federal bands and the Federal Banding authority, CEMAVE, came to work with the ER Team and others to learn about banding penguins.

This effort is part of The Penguin Network which partner in South America with local organizations and is co-managed by IBRRC and the International Fund for Animal Welfare (IFAW).

Read the full story on CNN.Com 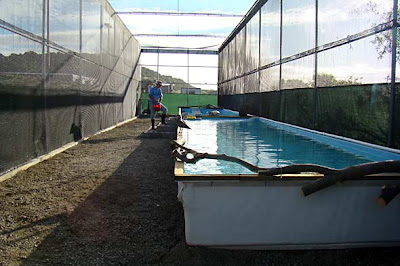