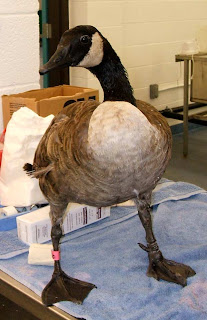 A young female Canada goose will be released today that was found injured with monofilament fishing line wrapped tightly around her leg – yet another casualty of careless fishing activity.

Her rescuer, Tony Taylor, had watched the goose over a number of weeks until finally, he and Officer Greg Randall from Los Angeles City Animal Services, were able to capture the large skittish bird. She was taken to International Bird Rescue Research Center (IBRRC) in San Pedro where her immediate prognosis was not good. 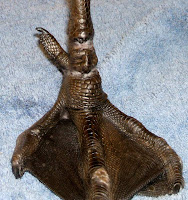 Although the fishing line had begun to cut off circulation and infection had set in on her left leg (see photo, click over for larger image), the veterinary team was able to pull her through with extensive treatment. She is now ready to return to the wild and rejoin with her flock. Her release is scheduled for Wednesday, October 1, 2008 at 6:00 PM.

We’d like to emphasize that this was a tremendous community effort – a networking of numerous individuals and agencies from the concerned citizen, Tony Taylor, whose persistence to find help for this poor bird led him to Los Angeles City Councilmember Tom LaBonge who helped draw attention to the plight of this injured animal, to Greg Randall, the Wildlife Officer for Los Angeles City Animal Services.