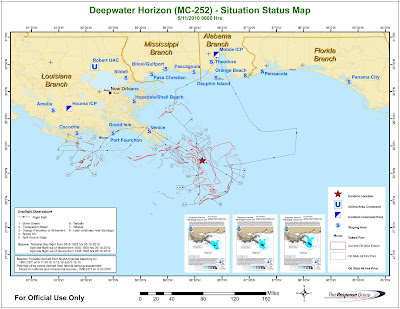 The Deepwater Horizon oil blow out continues to frustrate responders as as rough seas today hampered the dispatch of crews to new shorelines impacted by oil, the The Times Picayune said this afternoon.

Louisiana state officials say the Gulf of Mexico oil spill has reached Whiskey Island shoreline – one of the barrier islands off the coast of Terrebonne Parish.

Other areas affected by the slick include South Pass and the Chandeleur Islands.

The oil spill involves a ruptured drilling platform approximately 50 miles off the Louisiana coast. The drilling rig, the Deepwater Horizon, exploded on April 20, 2010 and sank in 5,000 feet of water. More than 100 workers scrambled off the burning rig in lifeboats. 11 workers are missing and presumed dead.

The ocean floor crude rupture is now gushing at least 5,000 barrels — or 210,000 gallons — of oil a day. While engineers work feverishly to cap the well, many officials worry the leak could go on for months. The latest idea is to use a newer, smaller containment box called a “top hat.” It arrived in the Gulf well blowout early today. More news 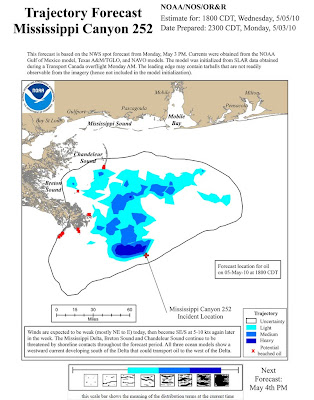 The newest Gulf oil spill map from NOAA has been posted. The oil slick continues move toward Florida from the uncapped seafloor gusher at the Deepwater Horizon drilling rig 45 miles off the Louisiana coast.

Response efforts have been stymied by choppy gulf seas over the past couple of days, but spill officials are optimistic Tuesday as the weather forecast shows sun and an ease in the winds.

BP has been unable to shut off the well, but crews have reported some progress using a remotely controlled underwater vehicle to dump chemicals called dispersants onto the oil as it gushes from the blown well.