With arrow gone, "Pinky" the turkey back to wild 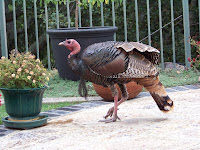 Good news for Pinky the young male wild turkey who had an arrow lodged in its flank for six weeks: It was caught on Friday, treated and released this weekend in Castro Valley.

Rebecca Dmytryk,of WildRescue with her husband Duane Titus should be credited for their determination in capturing the bird. Over the weekend the arrow was removed at IBRRC’s bird center and today the turkey was released back to the same area it was trapped, at Don Castro Regional Park.

The turkey underwent a two hour surgery to remove the arrow at IBRRC’s Fairfield bird center. The embedded arrow was causing the bird to noticeably limp. However, the arrow also was functioning as a splint for its fractured femur.

Pinky is most likely a North American wild turkey, Meleagris gallapavo. Wild turkeys can run at least 12 miles per hour when being pursued. They also can fly over 50 miles per hour, unless they were pinioned at a young age when being raised as domestic birds.