More news reports are coming out, some with humourous images (right) about the current brown pelican crisis in California. Currently there are 75 pelicans in care at IBRRC’s two bird centers:

PELICANS suffering from a mysterious malady are crashing into cars and boats, wandering along roadways and turning up dead by the hundreds across the West Coast, from southern Oregon to Baja California, Mexico, bird rescue workers say.

Weak, disoriented birds are huddling in people’s yards or being struck by cars. More than 100 have been rescued along the California coast, according to the International Bird Rescue Research Center in San Pedro.

Hundreds of birds, disoriented or dead, have been observed across the West Coast.

“One pelican actually hit a car in Los Angeles,” said Rebecca Dmytryk of Wildrescue, a bird rescue operation. “One pelican hit a boat in Monterey.”

From the Daily Telegraph in Australia: See Full story

Your help and words of encouragement are always appreciated! 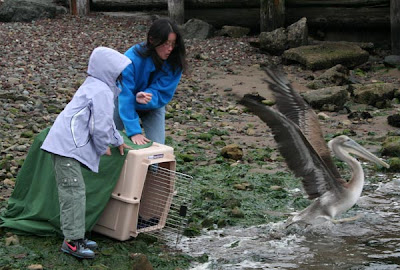 The influx of pelicans from Santa Cruz and Monterey areas has slowed down at IBRRC’s two bird rescue centers. The most recent birds are mostly fishing tackle injuries from the Santa Cruz/Monterey area and have problems as we assume many have been injured for days or weeks and coming into the center in poor condition. At the San Pedro center, we’re still getting a more regular flow of pelicans, about ten a week.

And there’s more good news, dedicated staff and volunteers have worked hard to rehabilitate these remarkable birds. Many have been released back into the wild. (See photo above)

Since June 15th IBRRC has taken in more than 150 endangered brown pelicans. Between the two California bird centers, 339 birds have been cared for since the beginning of 2008.

As always, IBRRC is appealing for public support to help us pay the ENORMOUS fish bill for this response. It will easily hit $40,000 by the month’s end.

Thanks to all who already supported our efforts!