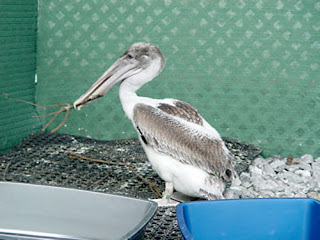 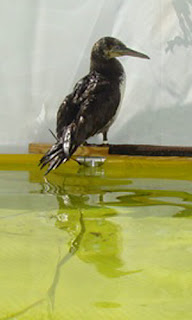 The U.S. Fish and Wildlife Service (USFWS) will release the birds at 4 p.m. Monday, May 10, at Pelican Island National Wildlife Refuge on the Atlantic coast northeast of Vero Beach, Florida. Directions

Please note: Accredited media wishing to cover the release of the birds should be at Centennial Tower in the refuge by 3:30 p.m. Monday, May 10.

The birds are a Northern Gannet and a Brown Pelican. The Gannet, a young male nicknamed “Lucky” by the workers who rescued him, was found April 27 in the Gulf near the source of the link. Clean-up workers on a boat reached out to him with a pole and he jumped on it. He was brought to the Bird Rehabilitation Facility at Ft. Jackson, Louisiana, on April 30.

The Tri-State Bird Rescue team, which includes the International Bird Rescue Research Center, evaluated Lucky and found he was about 80 percent oiled, giving him an orange appearance. He was thin and dehydrated, so wildlife veterinarian Dr. Erica Miller gave him intravenous fluids several times, as well as oral fluids and Pepto-Bismol for oil he may have ingested. He was washed with a Dawn detergent solution on May 1, and has been in an outdoor pool for a few days now, gaining weight. 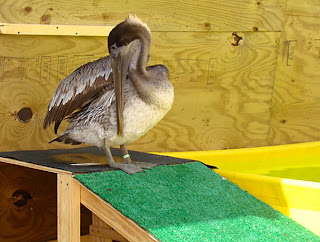 The pelican, also a young male, was found May 3 on Stone Island in Breton Sound on the Louisiana coast by a team that included personnel from the Service, the Louisiana Department of Wildlife and Fisheries and the U.S. Minerals Management Service. He was taken to the Ft. Jackson facility by helicopter the day he was rescued. He was thin and moderately oiled over his whole body. The Tri-State Bird Rescue Team, and wildlife veterinarian Dr. Miller treated him with IV and oral fluids, and started hand-feeding fish to him the first day. He was washed on 4 May and has been in an outside pool for several days, gaining weight.

Pelican Island National Wildlife Refuge was the nation’s first wildlife refuge, established by President Theodore Roosevelt in 1903. It was selected as the release site because it is located within the Indian River Lagoon, the most biologically diverse estuary in the United States. It has a large population of Gannets and Pelicans for the two rescued birds to join, and is out of the current oil spill trajectory.

The birds will be released by Dr. Sharon K. Taylor, a veterinarian and Environmental Contaminants Division Chief for the U.S. Fish and Wildlife Service.

Directions to the refuge are available at:
http://www.fws.gov/pelicanisland/visiting/directions.html