Duck Doing Well After Treatment for a Belly Full of Lead 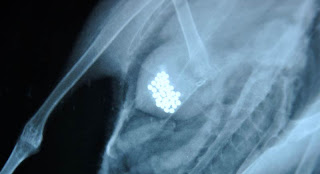 A male mallard is in recovery this week after the successful removal of BB pellets from his stomach by International Bird Rescue Research Center (IBRRC) staff. 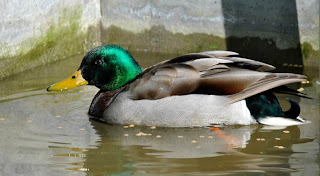 The drake arrived in late January at IBRRC’s Southern California center, and was not able to stand or walk. He was very dehydrated, had poor blood values, and was clearly in distress

When he was x-rayed, IBRRC staff discovered approximately 30 BBs in his stomach.

He is improving each day.

IBRRC has been saving aquatic birds around the world since 1971, and is a world leader in emergency response, rehabilitation, research and education. Its team of specialists has led oiled wildlife rescue efforts in over 200 oil spills in 11 States, two U.S. territories, and 7 different countries. Bird rescue is equally proud of the care it provides to the 5,000 injured, hungry, or orphaned birds that come into its centers each year. It is committed to ensuring that every bird impacted by changes to their environment is given hope to survive and thrive.