“Populations are made up of individuals, and if you start looking at individuals as if they’re not important, then ultimately the population becomes unimportant.” First oiled Brown Pelican was was washed at the Fort Jackson Center in Louisiana.

When the BP Deepwater Horizon well blew out on April 20, 2010, International Bird Rescue’s team of bird rescue specialists immediately responded with an all-hands-on-deck effort to rescue oiled seabirds and stop the loss of life. International Bird Rescue teamed up with Tri-State Bird Rescue, the lead oiled wildlife organization on the ground, to initiate bird rescue efforts on the water and help staff rehabilitation centers in Louisiana, Alabama, Mississippi and Florida.

This massive oil spill tested the nerves and stamina of our team, as we saw more than 200 million gallons of oil leaked into gulf waters, and over 8,000 birds captured and collected. The oil-stained beaches, marshland and inlets ran from Louisiana to Florida. At its busiest moment, Bird Rescue had approximately 88 trained wildlife responders working on this spill. The leaking rig was finally capped on July 15—about 11 weeks after the blowout. See also: Deepwater Horizon Gulf Oil Spill detailed wildlife reports

Oiled Brown and White Pelicans before and after cleaning at 2010 Gulf Oil Spill.

International Bird Rescue and Tri-State Bird Rescue had to navigate politics, the media, and the weather, in finding, collecting, treating and releasing birds suffering from the effects of the oil spill. Thanks to hard work, cooperation and expertise, International Bird Rescue was able to help release 1,246 cleaned birds back to the wild, including Brown Pelicans, Laughing Gulls, Green Herons, Snowy Egrets, Black Oystercatchers, Roseate Spoonbills and many others. National Geographic’s cover story on the Gulf Spill appeared in the October 2010 issue.

The Spill in Numbers

International Bird Rescue (“Bird Rescue”) has been saving seabirds and other aquatic birds around the world since 1971. Bird Rescue is dedicated to mitigating the human impact on seabirds and other aquatic bird species worldwide. This is achieved through emergency response, education, research and planning. Our team of specialists operates two year-round aquatic bird rescue centers in California, which care for over 5,000 birds every year, and has led oiled bird rescue efforts in over 220 oil spills in more than a dozen countries.

For 40 Years, Every Bird Has Mattered Today our organization turns 40. Reflecting on this milestone, I am especially grateful to you, our supporters, for four decades of partnership with the unyielding conviction that every bird matters – from the thousands of birds we tried to save in 1971 after an oil spill in the San Francisco Bay, and the more than 200 oil spills that followed, to the hundreds of seabirds that have arrived in our centers over recent months due to natural oil seep off the California coast. We have saved hundreds of thousands of birds.

To mark our anniversary, we have a refreshed look and a new website. Click here to take a tour. This update is simply a more contemporary way to express what has always been in our hearts, a deep commitment to doing all that we can to protect the lives of aquatic birds. You’ll see that we’ve also streamlined our name to International Bird Rescue, which we think says it all. Since the day we opened our doors, what has never changed – and never will – are our values, and especially our belief that every bird matters.

Over the past four decades, both the scope and the sophistication of our clinical work and research have evolved. Our dedicated team, supported by a remarkable crew of over 100 volunteers, now works out of two state-of-the-art wildlife care centers on the West Coast which treat more than 5,000 birds every year. We’ve responded to aquatic bird emergencies in all corners of the globe, from oiled Murres in Alaska following the Exxon Valdez, and the 20,000 penguins caught in the Treasure spill in South Africa, to the crisis in the Gulf of Mexico one year ago today.

All of this work is only possible because of people like you. As we reflect on 40 years of service, we would love to hear why you care about Bird Rescue, and invite you to leave us a message on our Facebook page.

Thank you for supporting 40 years of life-saving work and for encouraging others to do the same! 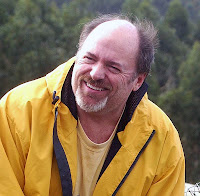 April 2011 is a big month for us in more ways than one. The 20th will mark not only the one-year anniversary of the Deepwater Horizon oil spill, but also International Bird Rescue Research Center’s 40th anniversary. If these two milestones weren’t enough, today our beloved Director Emeritus and Oceana’s 2010 ‘Ocean Hero,’ Jay Holcomb, celebrates his 60th birthday.

Jay was at the helm of International Bird Rescue Research Center as Executive Director for the best part of the last 24 years. Our team of wildlife specialists has responded to over 200 oil spills, and Jay has led our team on most of these occasions. I like to think of him as the Red Adair of oiled wildlife response.

I’m sure that there are many people who have Jay to thank for their connection and eventual dedication to this unique field of work; that is certainly my story. Having met Jay in France after an oil spill in January 2000, he persuaded me later that year to board a plane for Cape Town, South Africa, and join the unprecedented international rescue effort to save 20,000 oiled African Penguins. I would not be here at International Bird Rescue writing this email if I had not responded to that call.

Hundreds of oil spills and tens of thousands of birds later, Jay has not lost an ounce of his boundless energy, his larger-than-life personality, or his passion for the wildlife he has dedicated his life to protecting. As we reflect back on his incredible contributions to date, we also look forward to people and wildlife benefiting from Jay’s unique expertise for many more years to come.

So, on behalf of the people and animals whose lives you have touched, we wish you a very happy birthday, Jay. We salute you and will most definitely raise a glass in your honor. 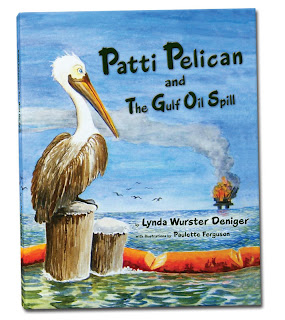 Author Lynda Deniger has brilliantly crafted a factual story about the plight of birds who were oiled, captured, cleaned and rehabilitated by caring humans during the 2010 Gulf oil spill. Her book, Patti Pelican and The Gulf Oil Spill, is a marvelous educational tool that will help children understand the importance and value of preserving and protecting our environment while conveying a message of hope and inspiring environmental stewardship in children and adults alike.

The author will generously donate 20% of all sales made through this link http://saltyseasandfriends.com/pattiPelican_ibrrc.html
to International Bird Rescue.

Thursday night was the West Coast premiere of Saving Pelican 895, the HBO documentary that Director Irene Taylor Brodsky filmed with us in Louisiana last summer during the Deepwater Horizon spill. Featured in the film, Mark Russell and I were invited to attend the premiere and participate in the Q&A session afterward. The premiere, which was in Irene’s hometown of Portland, Oregon, drew an unprecedented crowd of more than 600 guests to the auditorium of the Portland Art Museum. Earlier that day, 300 students participated in an advance screening.

The film follows the story of the 895th oiled Pelican treated during the spill from its capture to its release. Viewers recognized that 895 stood as a symbol of the care that each bird received, and were struck – and deeply moved – by the level of attention given to a single animal. 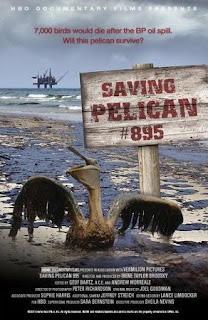 International Bird Rescue Research Center’s tagline is “every bird matters,” and the movie truly embodies this philosophy. Irene’s simple telling of this bird’s experience reminds us of the significance of the life of each and every animal that needs our care, and just how critical our work is – not just during a crisis – but every day.

We just learned that Saving Pelican 895 won the Best Documentary award at the prestigious Vail Film Festival. We would like to congratulate Irene Brodsky and HBO for their win.

The movie will have its East Coast premiere in New York on April 14, and will air on HBO beginning on April 20, the one-year anniversary of the Deepwater Horizon spill. It is my sincere hope that you will take the time to watch the film, and that you find it as meaningful as we did.