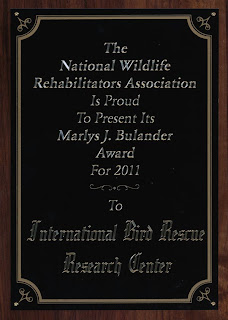 This award is given to those who have brought together individuals, organizations, rehabilitation facilities, and agencies in a cooperative effort to make a positive difference for wildlife.

The four organizations joined forces to care for the thousands of birds and other animals affected by the Deepwater Horizon oil spill in April 2010 off the coast of Louisiana. Together they built, organized and ran four oiled bird rehabilitation centers – the first in Ft. Jackson, Louisiana and second in Hammond, LA. The others were set up in Alabama and Mississippi. They also helped manage oiled wildlife stabilization sites at Grand Isle, Venice, and Intra-Coastal City, LA.

IBRRC had about 90 members of its response team helping in four states in the Gulf of Mexico region. This collaborative effort has led to the release of 1,170 birds to date. 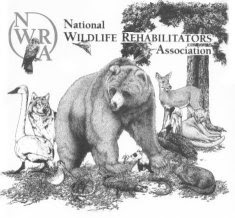 NWRA judges praised the speed and purpose with which the teams responded to the largest oil spill in United States history, as more than 200 million gallons of crude spilled from a ruptured drilling rig 45 miles off the Louisiana coast.

IBRRC is celebrating its 40th anniversary this year, and is a world leader in oiled wildlife emergency response, rehabilitation, research and education. Its team of specialists has led rescue efforts in over 200 oil spills in 11 States, two U.S. territories, and 7 different countries.

IBRRC is equally proud of the care it provides to the more than 5,000 injured, hungry, or orphaned birds that come into its two California wildlife care centers each year. It is committed to ensuring that every bird impacted by changes to their environment is given hope to survive and thrive.

This entry was posted on Saturday, March 5th, 2011 at 8:20 pm and is filed under Uncategorized. You can follow any responses to this entry through the RSS 2.0 feed. You can skip to the end and leave a response. Pinging is currently not allowed.