After nearly five months working at the Gulf Oil Spill I just returned to California and want to give you an update on IBRRC’s efforts at the largest oil spill in U.S. history.

The demobilization of all four rehabilitation centers and the remaining two stabilization centers should be completed in the next few weeks as they are no longer receiving oiled birds. We still have five IBRRC response team members in the gulf helping Tri-State Bird Rescue get the last of the birds released.

In terms of the rehabilitation of impacted birds, many of them did well considering the logistical and political challenges that were a part of this spill. Approximately 2,000 live oiled birds have been admitted to the rescue centers since late April.. To date we have released over 1,200 birds and still have another 150 or so in care. The final numbers will be posted at the official end of the rehabilitation program. See also: Deepwater Horizon Gulf Oil Spill detailed wildlife reports 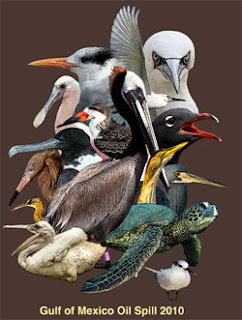 This was an unprecedented event in our nation’s and IBRRC’s history. Our organization mobilized over 88 response team members, and completed well over 400 media interviews from CNN to documentary film crews. We also provided our expertise to the U.S. government and various organizations and agencies involved in the spill. In addition, we cared for many new species of birds and provided invaluable experience to new and existing staff and response team members.

During this large-scale effort, while up to our elbows in oiled pelicans and chaos, we received an outpouring of good will and encouragement from our supporters, members and others who repeatedly relayed to us that our efforts gave them hope during what seemed like a hopeless situation. This was an unexpected surprise and meant a great deal to all of us who worked long hours to ensure that each bird received expert care.

The specific details and stories, as well as more pictures and video of our spill response and experiences will be forthcoming in the next few months. To commemorate this historic event, we have also created a limited edition t-shirt that honors and displays the birds that were the true stars of the oil spill and deserve the most recognition. It is available for purchase at IBRRC’s online store.

On behalf of all of our staff, volunteers and response team, I want to thank you for your support during the spill. We look forward to seeing you and talking to you in the future.

This entry was posted on Wednesday, September 22nd, 2010 at 3:53 am and is filed under Uncategorized. You can follow any responses to this entry through the RSS 2.0 feed. You can skip to the end and leave a response. Pinging is currently not allowed.