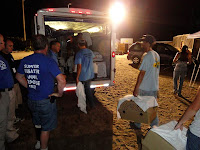 The move was a great success!

At 2:30 AM yesterday morning, staff from Tri-State Bird Rescue, IBRRC and Louisiana State Animal Response Team (LSART) arrived to the facility and began preparing the birds for their journey to Hammond. They were given rehydrating fluids and placed into carriers. The carriers were then lined up according to size and species. When the large Transport trucks arrived at 4:00 AM, the birds were systematically loaded – the most frail were loaded last so they would be offloaded first. They were on the road before 5:00 AM. It went incredibly smoothly and according to plan. 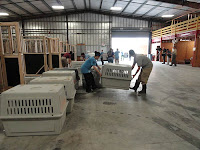 This new facility, located near Hammond’s Northshore Regional Airport sits on over 7 acres. It offers 4 large sheltered areas being used for outdoor housing and three large warehouses that have been retrofitted for our operations.

Hammond is about 60 miles north of New Orleans above Lake Pontchartrain. The new site is out of the hurricane ‘evacuation zone’.

Initially, the Hammond Bird Rehabilitation Facility will be capable of handling approximately 1,000 birds, and capacity could be increased to house as many as 2,000 to 3,000 birds.

Oiled animals that continue to come in through Venice and Port Sulphur, Louisiana will receive first aid at a stabilization site nearby before being transferred to the wildlife center in Hammond. Since we do not wash oiled birds right away this will not delay their treatment.

This entry was posted on Sunday, July 25th, 2010 at 2:26 am and is filed under Uncategorized. You can follow any responses to this entry through the RSS 2.0 feed. You can skip to the end and leave a response. Pinging is currently not allowed.

4 Responses to “Move to new Hammond bird center a success”