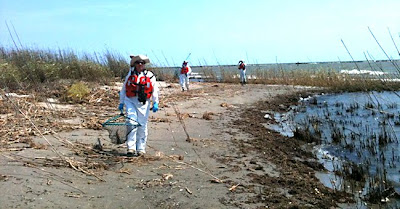 Yesterday was a hot but clear day in the Gulf of Mexico and it was a good day for the teams to get out in the field in all areas. In Louisiana the teams spotted many oiled terns and gulls that are still able to fly and will be working with teams from the USDA and U.S. Fish & Wildlife Service (USFWS) to see if it is possible to capture them with net guns. They also saw a lot of oil impacting the shore in the South Pass area of the Mississippi River basin. The crews witnessed a large fish kill and unusual floating blobs of oil below the surface of the water. It is assumed that it is oil mixed with dispersant but not confirmed. The situation is disturbing to all of us but we are working within the current structure to provide the best services that we can to help capture and rehabilitate oiled birds.

In Louisiana we received another Northern Gannet that workmen plucked out of the water in one of the oiled areas. We also received an oiled Laughing Gull and an Oiled Starling. Although all the centers are receiving rehab birds, birds with other injuries but not oiled, no other oiled birds from this spill were captured.

I have been asked to compare this spill with the 1989 Exxon Valdez oil spill many times by the media. The obvious similarities are that large amounts of oil have leaked into a marine environment and therefore the ecosystem is as risk. A few of the differences are:

1. Alaska has hundreds of thousands of surface rafting (resting), diving and feeding birds, (Puffins, Murres, Auklets, Cormorants, Loons etc.) The Gulf of Mexico has fewer surface rafting birds but more plunge feeding birds (pelicans, gannets, terns) but the pelicans and terns spend a lot of time roosting on the outer islands and not on the water. So, impact of large rafts of these birds is unlikely. It’s more a case of individual birds plunging into oily water which is why we are getting gannets and pelicans.

2. The warm weather here allows oiled birds that are still flighted to stay warm for longer periods of time whereas even the smallest amounts of oil that penetrate to the skin of birds in cold climates puts them at immediate vulnerability to hypothermia and therefore death.

3. In Alaska there were many predators such as bald eagles and bears who took many of the oiled birds before we could get to them. In the gulf we do not have those predators on the outer islands but there are coyotes and raccoons on some of the islands.

We now have received 15 oiled birds since this incident began.

Thanks for your interest in our efforts,

International Bird Rescue Research Center (IBRRC) is working with the main responder, Tri-State Bird Rescue of Delaware. IBRRC has about 20 response team members on the ground including veterinarians, wildlife rehabilitation managers and facilities and capture specialists.

The oil spill involves a ruptured drilling platform approximately 50 miles off the Louisiana coast. The drilling rig, the Deepwater Horizon, exploded on April 20, 2010 and sank in 5,000 feet of water.

The leak continues to spill oil into Gulf waters and BP has made some progress in plugging the gush of crude from the ocean floor. So far, experts believe the amount of oil in the water has surpassed the 11 million gallons spilled during the 1989 Exxon Valdez disaster.

This entry was posted on Tuesday, May 18th, 2010 at 4:12 pm and is filed under Uncategorized. You can follow any responses to this entry through the RSS 2.0 feed. You can skip to the end and leave a response. Pinging is currently not allowed.