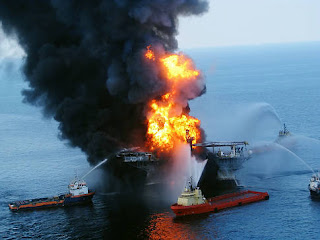 As oil drifts toward land, the U.S. Coast Guard said Wednesday that it will set fire to an oil spill in the Gulf of Mexico.

The “controlled burn” would involve setting fire to an area of oil trapped by special containment booms on the ocean’s surface.

About 1,000 barrels (42,000 US gallons) of crude are leaking every day after the Deepwater Horizon rig exploded and sank last week. At least 11 of the rig’s workers are still missing and presumed dead 50 miles off the Louisiana coast.

Officials estimate the oil slick has a circumference of about 600 miles (about 970 kilometers), though the shape of the spill area is very irregular. The spill is big enough to be seen from space.

IBRRC is still on alert for the spill and is ready to lend a hand.

The bird rescue group has nearly 40 years of experience in working on oil spills. In 1989 a response crew spent 6 months in Alaska working on bird collection and care in the aftermath of the Exxon Valdez spill in Prince William Sound. That spill dumped 11 million gallons of oil into the fragile waters and killed hundred of thousands of birds and mammals.

This entry was posted on Wednesday, April 28th, 2010 at 5:26 pm and is filed under Uncategorized. You can follow any responses to this entry through the RSS 2.0 feed. You can skip to the end and leave a response. Pinging is currently not allowed.