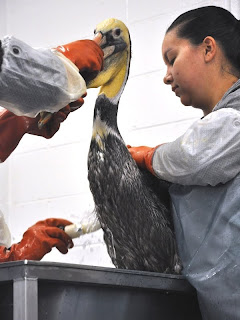 As of today, IBRRC’s Los Angeles Center has now received a total of 130 non-oiled birds since the beginning of last week’s storms. 107 of these birds were pelicans. In addition, 9 oiled birds from natural seep and 6 oiled birds from the spill in Huntington Beach have been received.

The center is shutting its doors to pelicans and other birds being transferred from other wildlife centers for the next 48 hours to help cope with the influx of wildlife casualties.

IBRRC’s San Francisco Bay Center has now received 50 pelicans and expect another 20 in the coming days. A number of ducks (including buffleheads and canvasbacks) have also arrived, some that have been shot and others downed by the storms.

We will be trying our best to keep updating these numbers.

This entry was posted on Tuesday, January 26th, 2010 at 6:56 pm and is filed under Uncategorized. You can follow any responses to this entry through the RSS 2.0 feed. You can skip to the end and leave a response. Pinging is currently not allowed.