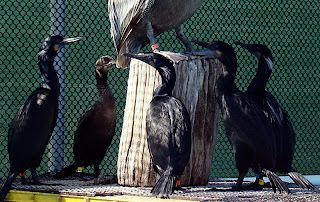 Another oddity is that many were found in Bay Area parking lots and on roads when they should be found on beaches or jetties.

For these specialists in aquatic bird rehabilitation, a higher than normal number of patients always signifies a greater problem, as was the case this winter with the scores of ailing pelicans.

While it is premature to say exactly why so many of these birds are falling ill, Jay Holcomb, director of the aquatic bird facility believes the recent high winds may have contributed to the strandings.

This speculation that unusual weather or climate change may be impacting sea birds is supported by recent word from Farallon Islands researchers that the Brandt’s cormorants have not started nesting, as they should. The atypical winds, choppy seas, and sparse zooplankton may be the reason.

Last year researchers reported the smallest breeding population of Brandt’s with the lowest reproductive success in twenty years. Researchers hope this is not the sign of another colony failure.

The birds in convalescence are being treated for superficial wounds and are doing well. The rescue organization is asking for help from the public in reporting birds that appear injured or stranded and donations to help cover the cost of their care.

For rescues people are urged to call the California wildlife hotline at 866-WILD-911 for the nearest rescuer.

This entry was posted on Thursday, April 16th, 2009 at 6:00 pm and is filed under Uncategorized. You can follow any responses to this entry through the RSS 2.0 feed. You can skip to the end and leave a response. Pinging is currently not allowed.