Trashed: The oceans as a dumping ground 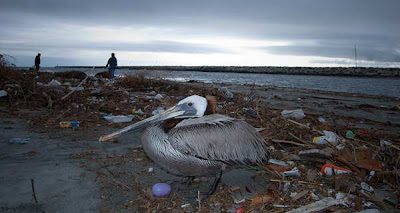 Forget global warming, oil spills, the mess in the Middle East and anything else that troubles you. Look to the oceans for something you should really be worried about: Trash.

Yes, the refuse from our modern life is floating around the world’s oceans and washing up on our beaches just to remind us that we’re some of the biggest pigs in the universe.

In the Pacific Ocean experts even have named an area for it: “The Great Pacific Garbage Patch.” The trash in this area collects due to a clockwise trade wind that circulates along the Pacific Rim. The area in the North Pacific Gyre accumulates garbage the same way foam gathers at the center of hot tub.

Disposal lighters, fishing line, plastic toys, fast food containers litter the ocean affecting birds and other marine life. The garbage beaches itself too, (see photo above) causing peril to pelicans and shorebirds that get tangled in the trash or injest the plastic items thinking that it may be food.

This entry was posted on Monday, January 14th, 2008 at 5:39 pm and is filed under Uncategorized. You can follow any responses to this entry through the RSS 2.0 feed. You can skip to the end and leave a response. Pinging is currently not allowed.